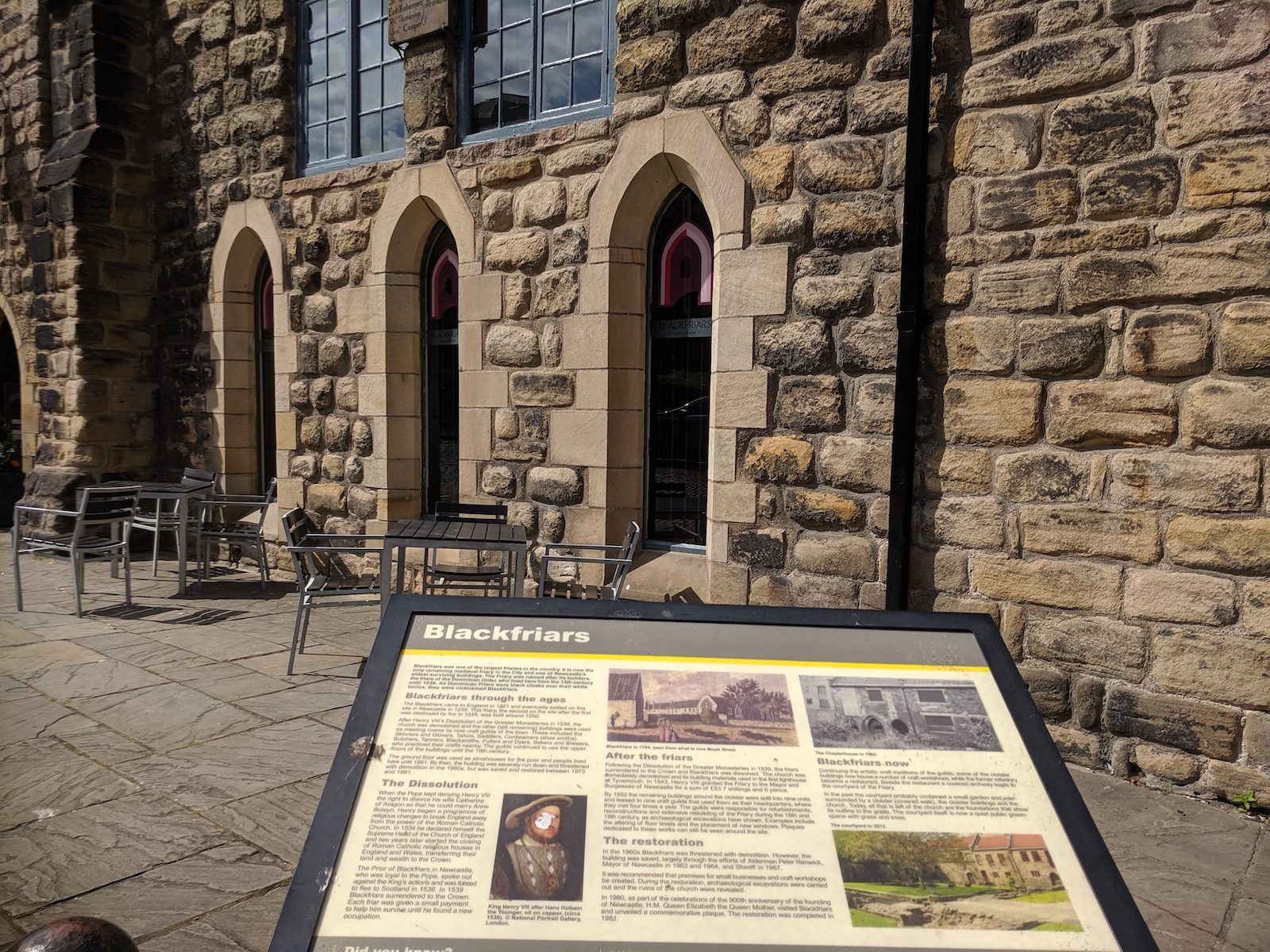 Blackfriars was one of the largest friaries in the country.  It is now the only remaining medieval friary in the City and one of Newcastle’s oldest surviving buildings, the friars of the Dominican Order, who lived here from the 13th century until 1539.  As Dominican Friars wore black cloaks over their white tunics, they were nicknamed Blackfriars.

Blackfriars through the ages
The Blackfriars came to England in 1221 and eventually settled on this site in Newcastle in 1239.  This friary, the second on the site after the first was destroyed by fire in 1248, was built around 1250.

After Henry V111’s Dissolution f the Greater Monasteries in 1539, the church was demolished and the  other (still remaining) buildings were used as meeting rooms by nine craft guilds of the town.  These included the Skinners and Glovers, Cordwainers (shoe smiths), Butchers, Tanners, Blacksmiths, Fullers and Dyers, Bakers and Brewers, who practised their crafts nearby.  The guilds continued to use the upper floors of the buildings until the 19th century.

The ground floor was used as almshouses for the poor and people lived here until 1951.  By then the buildings were severely run down and threatened with demolition in the 1960s, but was saved and restored between 1973 and 1981.

The Dissolution
When the Pope kept denying Henry V111 the right to divorce Catherine of Aragon so that he could marry Anne Boleyn, Henry began a program of religious changes to break England away from the power of the Roman Catholic Church.  In 1534 he declared himself the Supreme Head of the Church of England and two years later started the closing of Roman Catholic religious houses in England and Wales, transferring their land and wealth to the Crown.

The Prior of Blackfriars in Newcastle, who was loyal to the Pope, spoke out against the Kings actions and was forced to flee to Scotland in 1536.  In 1539 Blackfriars surrendered to the Crown.  Each friar was given a small payment to help him survive until he found a new occupation.

After the friars
Following the dissolution of the Greater Monasteries in 1539, the friars surrendered to the Crown and Blackfriars was dissolved. The church was immediately demolished and its building materials used in the first lighthouse at Tynemouth. In 1543 Henry V111 granted the Friary to the Mayor and Burgesses of Newcastle for a sum of £53 7 shillings and 6 pence.
By 1552 the remaining buildings around the cloister were split into nine units and leased to nine craft guilds that used them as their headquarters where they met four times a year. The guilds were responsible for refurbishments, reconstructions and extensive rebuilding of the Friary during the 18th and 19th century’s, as archaeological excavations have shown. Examples include the altering of floor levels and the placement of new windows. Plaques dedicated to these works can still be seen around the site.

The Restoration
In the 1960s Blackfriars was threatened with demolition.  However the building was saved, largely through the efforts of Alderman PeterRenwick, Mayor of Newcastle in 1963 and 1964, and Sheriff in 1967.

It was recommended that premises for small businesses and craft workshops be created.  During the restoration, archaeological excavations were carried out and the ruins of the church were revealed.

In 1980 as part of the celebrations of the 900th anniversary of the founding of Newcastle, H.M Queen Elizabeth the Queen Mother, visited Blackfriars and unveiled a commemorative plaque.  The restoration was completed in 1981.

Blackfriars Now
Blackfriars today continues the artistic craft of the guilds, some of the cloister buildings now house a number of craft workshops, while the former refectory became a restaurant.  Beside the restaurant a covered archway leads to the courtyard of the friary.

In the past the courtyard probably contained a small garden and was surrounded by a cloister (covered walk), the cloister building and the church.  Today, all that is left of the church are the foundations that show its outline in the grass.  The courtyard itself is now a quite public green space with grass and trees.