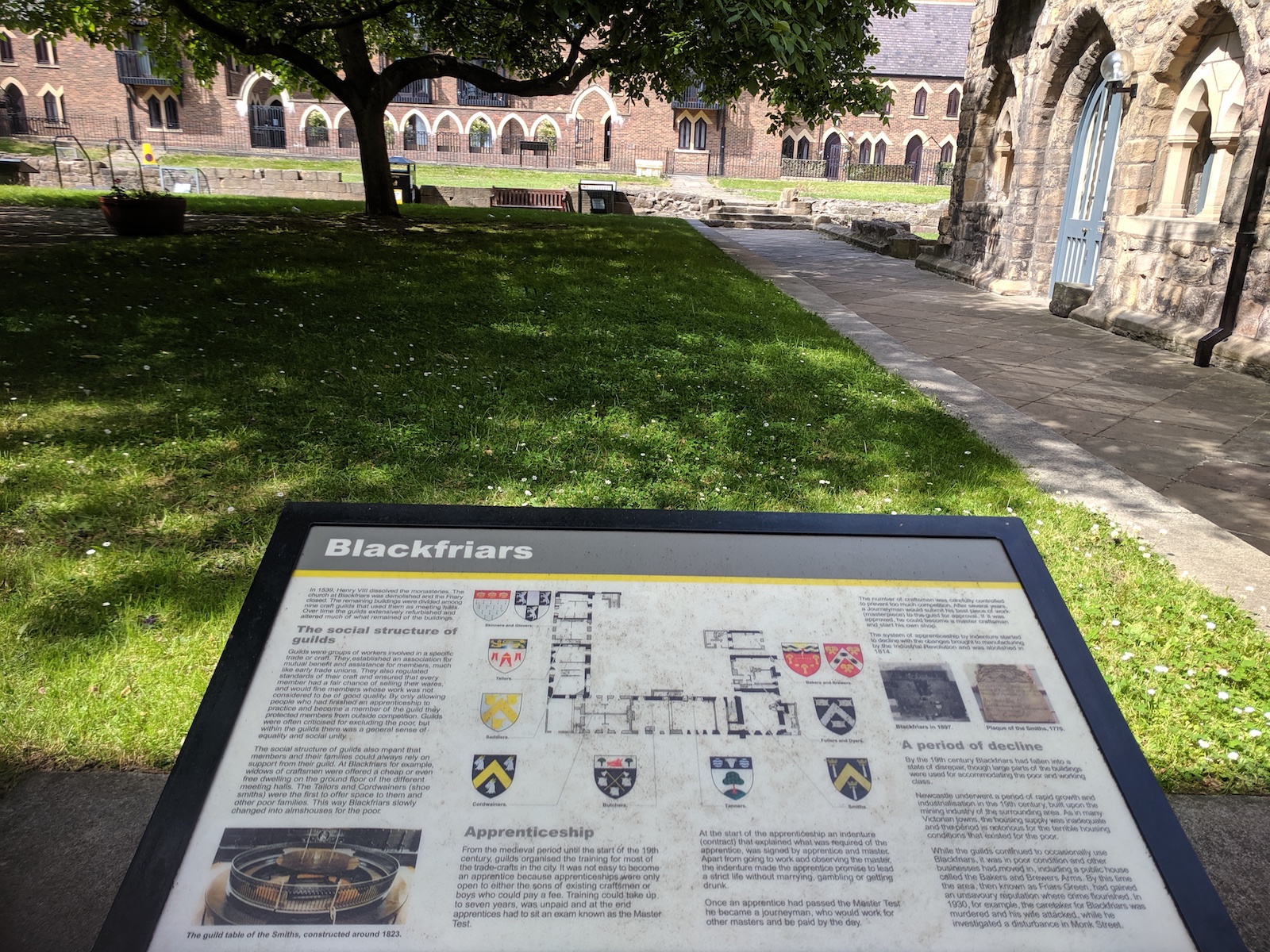 In 1539, Henry VIII dissolved the monasteries.  The church at Blackfriars was demolished and the Friary closed. The remaining buildings were divided among nine craft guilds that used them as meeting halls. Over time the guilds extensively refurbished and altered much of what remained of the buildings.

The social structure of guilds
Guilds were groups of workers involved in a specific trade or craft. They, established an association for mutual benefit and assistance for members , much like early trade unions. They also regulated standards of their craft and ensured that every member had a fair chance of selling their wares, and would fine members whose work was not considered to be of good quality. By only allowing people who had finished an apprenticeship to practice and become a member of the guild they protected members from outside competition. Guilds were often considered for excluding the poor, but within the guilds there was a general sense of equality and social unity.

The social structure of guilds also meant that members and their families could always rely on support from their guild. At Blackfriars for example, widows of craftsmen were offered a cheap or even free dwelling on the ground floor of the different meeting halls. The Tailors and Cordwainers (shoe smiths) were the first to offer space to them and other poor families. This way Blackfriars slowly changed into almshouses for the poor.

Apprenticeship
From the medieval period until the start of the nineteenth century, guilds organised the training for most the trade-crafts in the city. It was not easy to become an apprentice because apprenticeships were only open to either sons of existing craftsmen or boys who could pay a fee. Training could take up to seven years and was unpaid.

At the start of the apprenticeship an indenture (contract) that explained what was required of the apprentice, was signed by apprentice and master. Apart from going to work and observing the master, the indenture made the apprentice promise to lead a strict life without marrying, gambling or getting drunk. Once an apprentice had passed the Master Test he became a journeyman, who would work for other masters and be paid by the day.

The number of craftsmen was carefully controlled to prevent too much competition. After several years, a Journeyman would submit the best piece of work (masterpiece) to the guild for approval. If it was approved, he could become a master craftsman and start his own shop.
The system of apprenticeship by indenture started to decline with the changes brought to manufacturing by the Industrial Revolution and was abolished in 1814.

A Period of Decline
By the 19th century Blackfriars had fallen into a state of disrepair, though large parts of the buildings were used for accommodating the poor and working class. Newcastle underwent a period of rapid growth and industrialisation in the 19the century, built upon the mining industry of the surrounding area. As in many Victorian towns, the housing supply was inadequate and the period is notorious for the terrible housing conditions that existed for the poor.

When the guilds continued to occasionally use Blackfriars, it was in poor condition and other businesses had moved in, including a public house called the Bakers and Brewers Arms. By this time the area, then known as Friars Green, had gained an unsavoury reputation where crime flourished. In 1930, for example, the caretaker for Blackfriars was murdered and his wife attacked, while he investigated a disturbance in Monk Street.