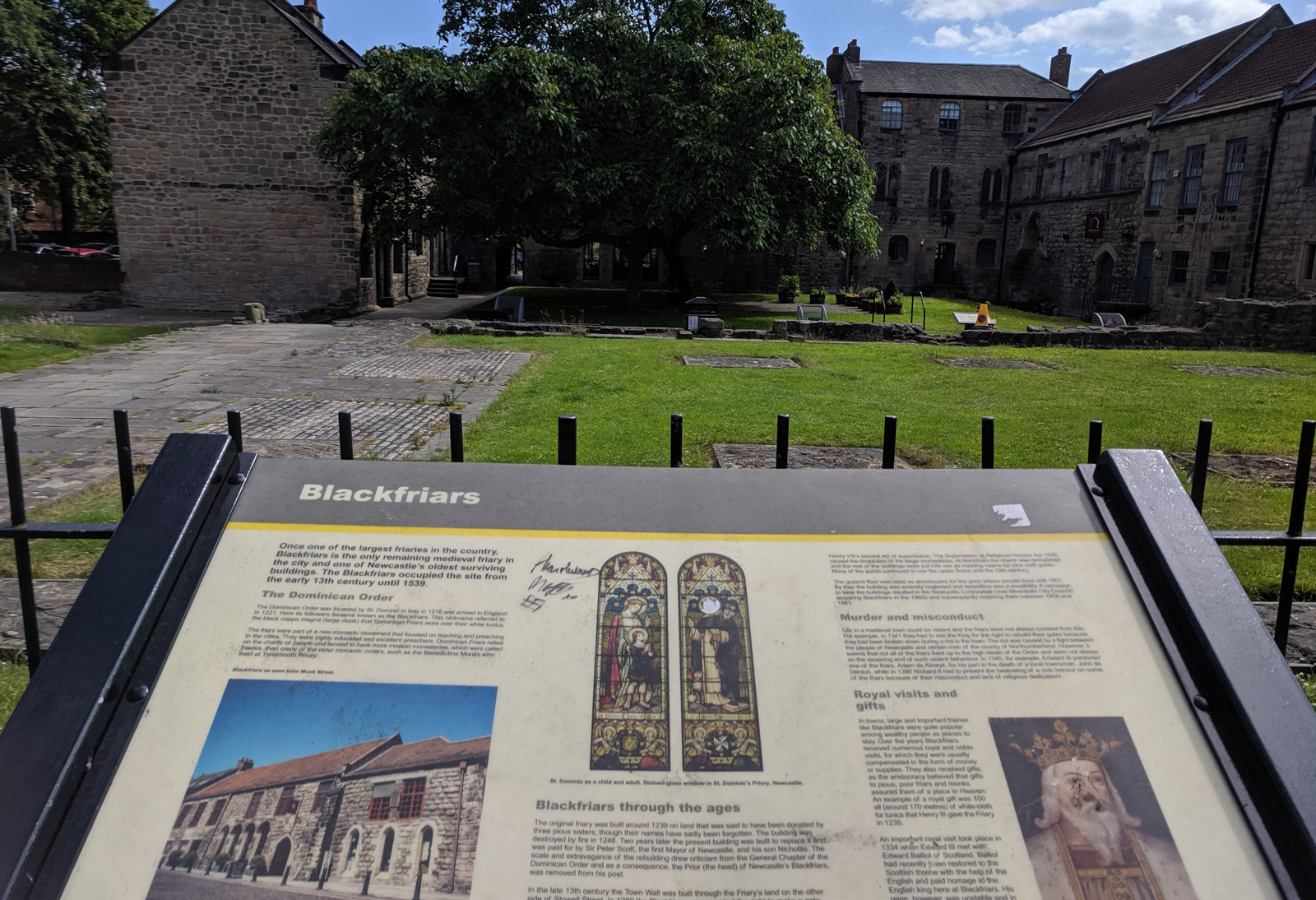 Once one of the largest friaries in the country, Blackfriars is the only remaining medieval friary in the city and one of Newcastle’s oldest surviving buildings.  The Blackfriars occupied the site from the early 13th century until 1539.

The Dominican Order
The Dominican Order was founded by St Dominic in Italy in 1216 and arrived in England in 1221.  Here its followers became known as the  Blackfriars.  This nickname referred to the black cloaks that Dominican Friars wore over their white tunics.

The Friars were part of a new monastic movement that focused on teaching and preaching in the cities. They were highly educated and excellent preachers.  Dominican Friars relied on the charity of people and tended to have more modest monasteries, which were called friaries, than many older monastic orders, such as the Benedictine Monks who lived at Tynemouth Priory.

Blackfriars through the ages
The original friary was built around 1239 on land that was said to have been donated by three pious sisters, though their names have sadly been forgotten.  The building was destroyed by fire in 1248.  Two years later the present building was built to replace it and was paid for by Sir Peter Scott, the first mayor of Newcastle and his son Nicholas.  The scale and extravagance of the building drew criticism from the general chapter of the Dominican Order and as a consequence the Prior (the head) of Newcastle’s Blackfriars was removed from his post.

In the later 13th century the  Town Wall was built through the Friary’s land on the other side of Stowell.  In 1280 the Blackfriars were granted the right to make a gate through the wall so they could access the garden on the other side.  The blocked up gate can still be seen (the best preserved section of) the Town Wall on Back Stowell Street, behind Chinatown.

Henry V111’s second act of suppression.  The Suppression of Religious Houses Act 1539, caused the dissolution of the larger monasteries.  At Blackfriars the church was demolished an the rest of the  buildings were put into use as meeting rooms for nine craft guilds.  Many of the guilds continued to use the upper floors until the nineteenth century.

The ground floor was used as almshouses for the poor where people lived until 1961.  By then the buildings were severely neglected and demolition was a possibility.  A campaign to save the buildings resulted in the Newcastle Corporation (now Newcastle City Council) acquiring Blackfriars in the 1960s and subsequently restoring them between 1975 and 1981.

Murder and Misconduct
Life in a medieval town could be violent and the friars were not always isolated from  this.  For example, in 1341 they had to ask the King for the right to rebuild their gates because they had been broken down during a riot in the town.  The riot was caused by a fight between the people of Newcastle and certain men of the county of Northumberland.  However it seems that not all of the friars lived up to the high ideals of the Order and were not always on the receiving end of such violent behaviour.  In 1345 for example, Edward 111 pardoned one of the friars, Adam de Alnwyk, for is part in the death of a local townsman, John de Denton, while in 1390 Richard 11 had to prevent the  bestowing of a civic honour on some of the friars because of their misconduct and lack of religious dedication.

Royal Visits and Gifts
In towns, large and important friaries like Blacere quite popular among wealthy people as places to stay.  Over the years Blackfriars received numerous royal and noble visits, for which they were usually compensated for in the form of money or supplies. They also received gifts as the aristocracy believed that gifts to pious poor friars and monks assured them of a place in Heaven. An example of a royal gift was 150 ell ( around 170 metres) of white cloth for tunics that Henry 111 gave the Friary in 1239.
An important royal visit took place in 1334 when Edward 111 met with Edward Balliol of Scotland. Balliol had recently been restored to the Scottish throne with the help of the English king here at Blackfriars. His reign, however was unstable and in 1356 Balliol surrendered his claim to the Scottish throne to Edward 111 in exchange for an English pension.

In the 1960s Blackfriars was threatened with demolition. However, the building was saved, largely through the effort of Alderman Peter Renwick, Mayor of Newcastle in 1963 and 1964 and Sheriff in 1967.

It was recommended that premises for small businesses and craft workshops be created. During the restoration, archaeological excavations were carried out and the ruins of the church were revealed.