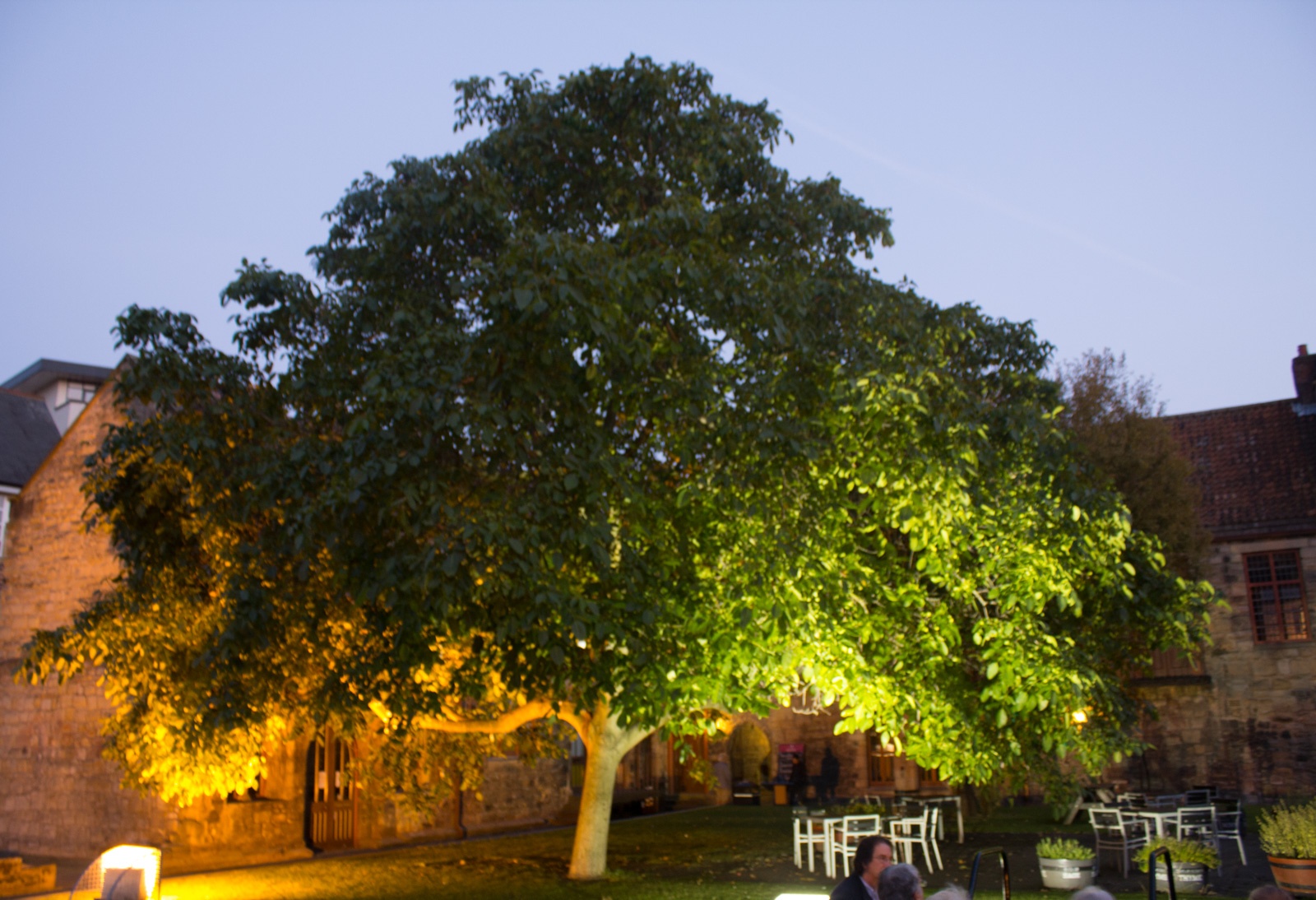 Blackfriars was one of the largest friaries in the country.  It is now the only remaining medieval friary in the City and one of Newcastle’s oldest surviving buildings, the friars of the Dominican Order, who lived here from the 13th century until 1539.  As Dominican Friars wore black cloaks over their white tunics, they were nicknamed Blackfriars. The Blackfriars came to England in 1221 and eventually settled on this site in Newcastle in 1239.  This friary, the second on the site after the first was destroyed by fire in 1248, was built around 1250. 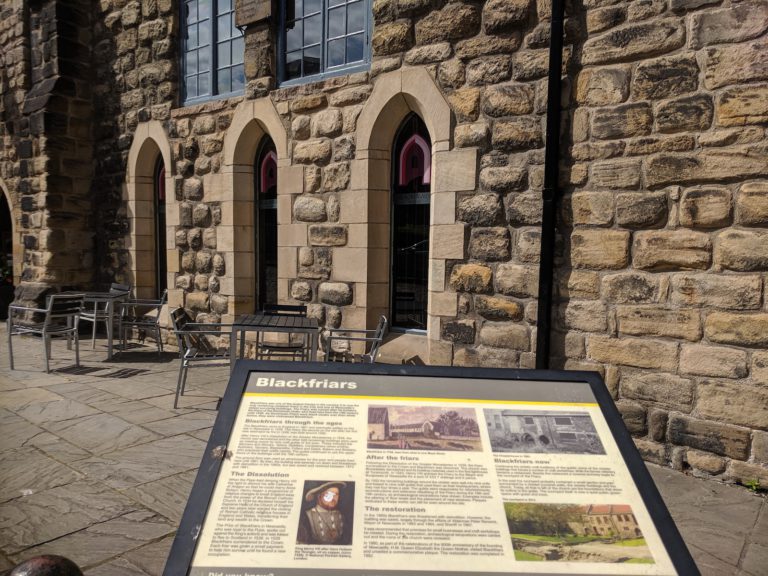 Blackfriars was one of the largest friaries in the country.  It is now the only remaining medieval friary in the City and one of Newcastle’s oldest surviving buildings, the friars of the Dominican Order, who lived here from the 13th century until 1539.  As Dominican Friars wore black cloaks over their white tunics, they were nicknamed… 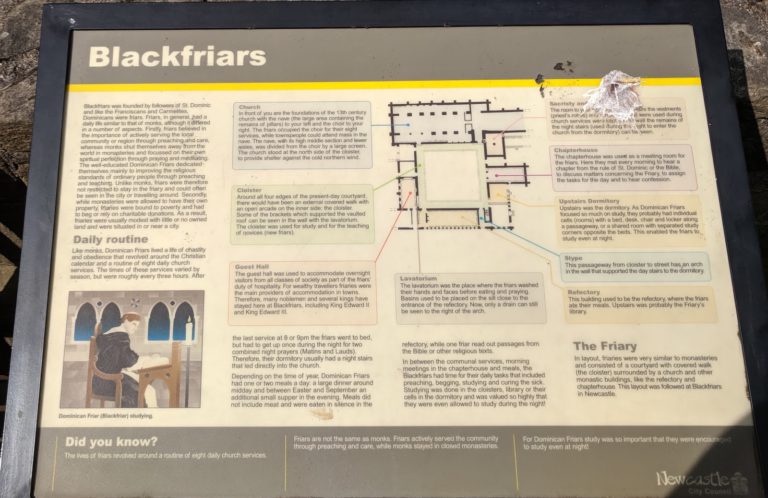 Blackfriars was founded by followers of St. Dominic and like the Franciscans and Carmelites, Dominicans were friars.  Friars in general, had a daily life similar to that of monks, although it differed in a number of aspects. Firstly Friars believed in actively supporting the local community or region through preaching and care, whereas monks shut… 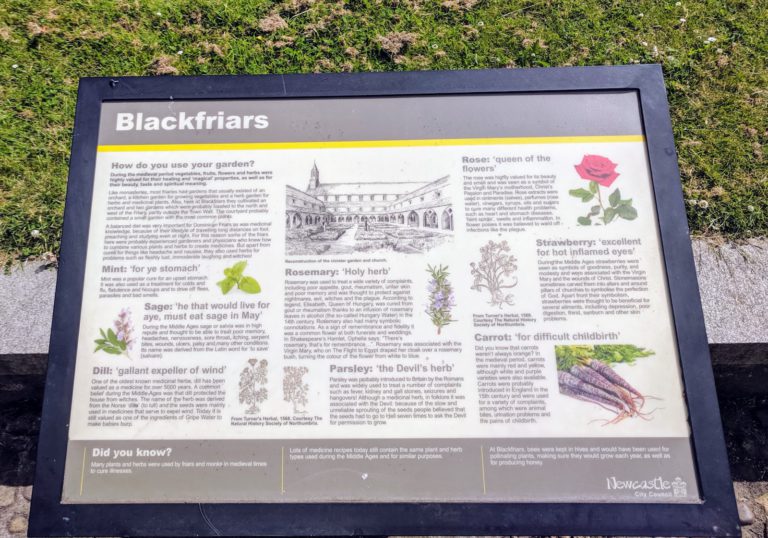 During the medieval period vegetables, fruits,  flowers and herbs were highly valued for their healing and magical properties, as well as for their beauty, taste and spiritual meaning. Like monasteries, most friaries had gardens that usually consisted of an orchard, a kitchen garden for growing vegetables  and a herb garden for herbs and medicinal plants. … 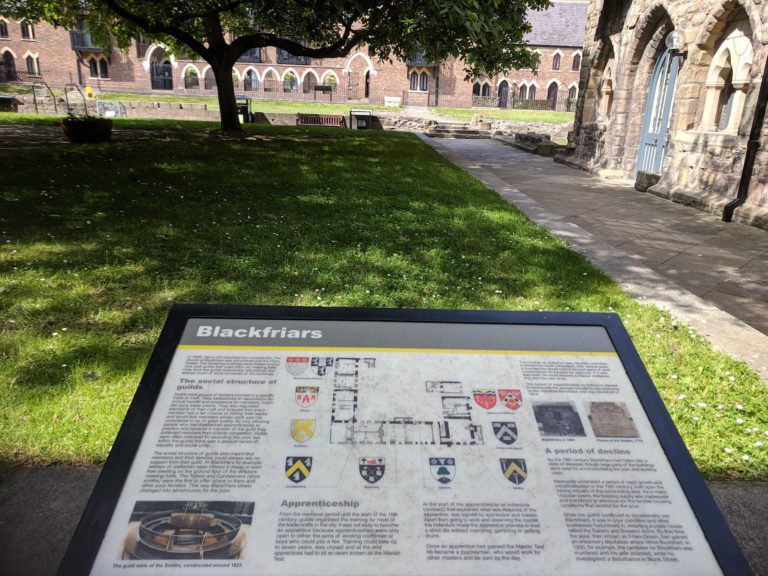 In 1539, Henry VIII dissolved the monasteries.  The church at Blackfriars was demolished and the Friary closed. The remaining buildings were divided among nine craft guilds that used them as meeting halls. Over time the guilds extensively refurbished and altered much of what remained of the buildings. The social structure of guilds Guilds were groups… 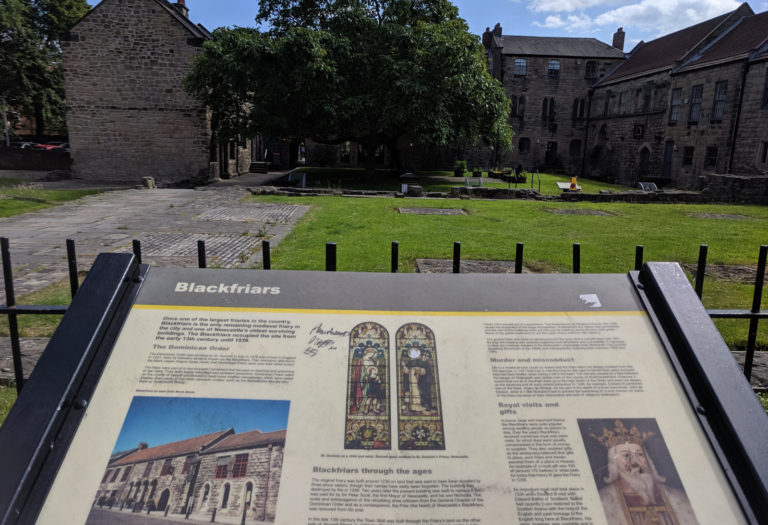 Once one of the largest friaries in the country, Blackfriars is the only remaining medieval friary in the city and one of Newcastle’s oldest surviving buildings.  The Blackfriars occupied the site from the early 13th century until 1539. The Dominican OrderThe Dominican Order was founded by St Dominic in Italy in 1216 and arrived in England in 1221.  Here its followers became…

After Henry V111’s Dissolution f the Greater Monasteries in 1539, the church was demolished and the  other (still remaining) buildings were used as meeting rooms by nine craft guilds of the town.  These included the Skinners and Glovers, Cordwainers (shoe smiths), Butchers, Tanners, Blacksmiths, Fullers and Dyers, Bakers and Brewers, who practised their crafts nearby.  The guilds continued to use the upper floors of the buildings until the 19th century.

The ground floor was used as almshouses for the poor and people lived here until 1951.  By then the buildings were severely run down and threatened with demolition in the 1960s, but was saved and restored between 1973 and 1981.

When the Pope kept denying Henry V111 the right to divorce Catherine of Aragon so that he could marry Anne Boleyn, Henry began a program of religious changes to break England away from the power of the Roman Catholic Church.  In 1534 he declared himself the Supreme Head of the Church of England and two years later started the closing of Roman Catholic religious houses in England and Wales, transferring their land and wealth to the Crown.

The Prior of Blackfriars in Newcastle, who was loyal to the Pope, spoke out against the Kings actions and was forced to flee to Scotland in 1536.  In 1539 Blackfriars surrendered to the Crown.  Each friar was given a small payment to help him survive until he found a new occupation.

In the 1960s Blackfriars was threatened with demolition.  However the building was saved, largely through the efforts of Alderman Peter Renwick, Mayor of Newcastle in 1963 and 1964, and Sheriff in 1967.

It was recommended that premises for small businesses and craft workshops be created.  During the restoration, archaeological excavations were carried out and the ruins of the church were revealed.

In 1980 as part of the celebrations of the 900th anniversary of the founding of Newcastle, H.M Queen Elizabeth the Queen Mother, visited Blackfriars and unveiled a commemorative plaque.  The restoration was completed in 1981.

Blackfriars today continues the artistic craft of the guilds, some of the cloister buildings now house a number of craft workshops, while the former refectory became a restaurant.  Beside the restaurant a covered archway leads to the courtyard of the friary.

In the past the courtyard probably contained a small garden and was surrounded by a cloister (covered walk), the cloister building and the church.  Today, all that is left of the church are the foundations that show its outline in the grass.  The courtyard itself is now a quite public green space with grass and trees.