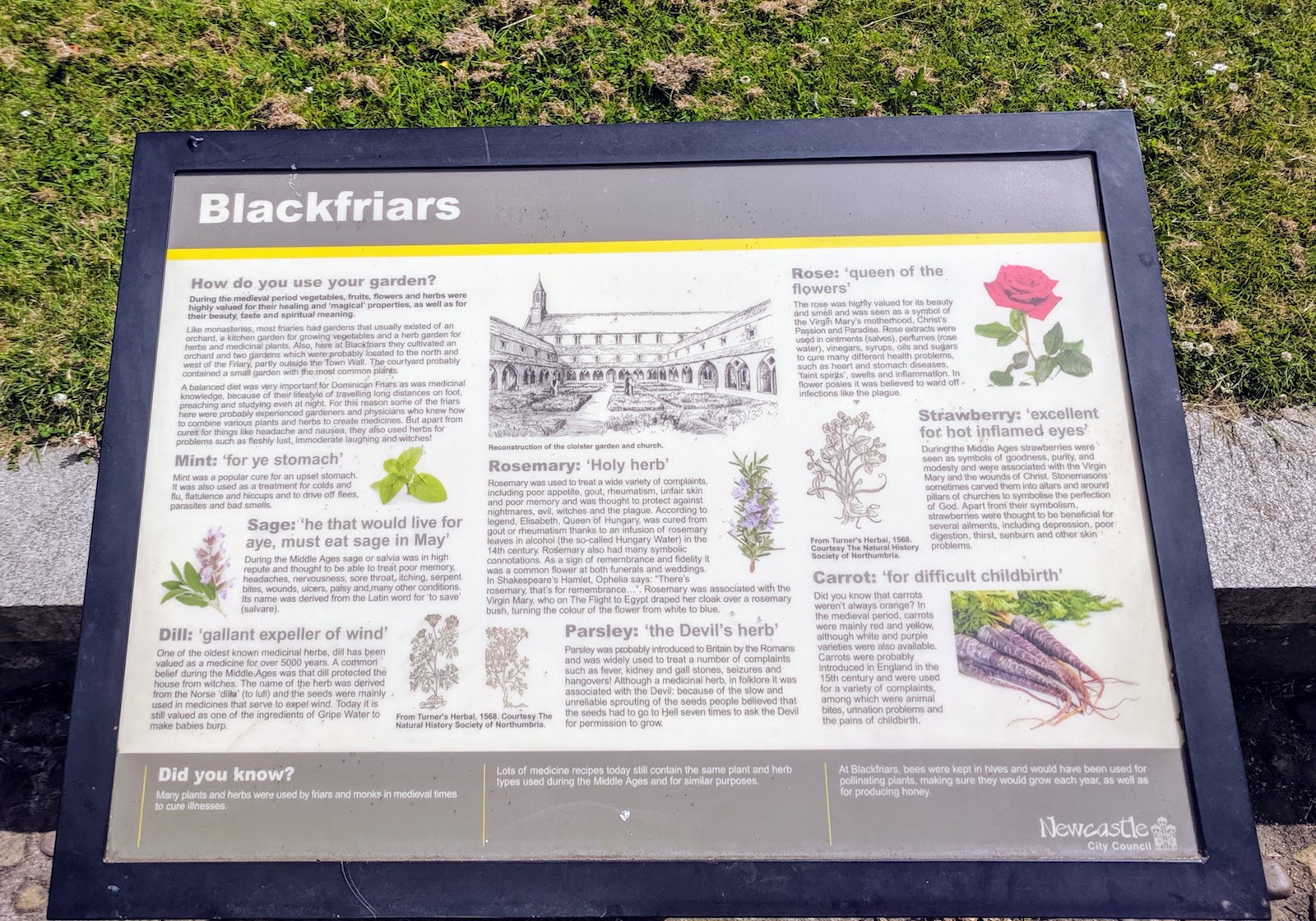 During the medieval period vegetables, fruits,  flowers and herbs were highly valued for their healing and magical properties, as well as for their beauty, taste and spiritual meaning.

Like monasteries, most friaries had gardens that usually consisted of an orchard, a kitchen garden for growing vegetables  and a herb garden for herbs and medicinal plants.  Also, here in Blackfriars they cultivated an orchard and two gardens which were probably located to the north and west of the Friary, partly outside the Town Wall.  The courtyard probably contained a small garden with the most common plants.

A balanced diet was very important for ‘Dominican Friars as was medicinal knowledge, because of their lifestyle of travelling long distances on foot, preaching and studying even at night. For this reason some of the friars here were probably experienced gardeners and physicians who knew how to combine various plants and herbs to create medicines. But apart from cures for things like headache and nausea, they also used herbs for problems such as fleshy lust, immoderate laughing and witches!

Mint: “for ye stomach”
Mint was a popular cure for an upset stomach. It was also used as a treatment for colds and flu, flatulence and hiccups to drive off flees, parasites and bad smells.

Sage:”he that would live for aye, must eat age in May”
During the Middle Ages sage or saliva was in high repute and thought to be able to treat poor memory, headaches nervousness, sore throat, itching, serpent bites, wounds, ulcers, palsy and many other conditions. Its name was derived from the latin word for ‘to save’ (salvare).

Dill: ‘gallant expeller of wind’
One of the oldest known medicinal herbs, dill has been valued as medicine for over 5000 years. A common belief during the Middle Ages was that dill protected the house from witches. The name of the herb was derived from the Norse ‘dill’ (to lull) and the seeds were mainly used in medicines that serve to expel wind. Today it is still valued as one of the ingredients of Gripe Water to make babies burp.

Rosemary: ‘Holy herb’
Rosemary was used to treat a wide variety of complaints, including poor appetite, gout, rheumatism, unfair skin and poor memory and was thought to protect against nightmares, evil, witches and the plague. According to legend, Elisabeth, Queen of Hungary, was cured from gout or rheumatism thanks to an infusion of rosemary leaves in alcohol (the so called Hungary Water) in the 14th century. Rosemary also had many symbolic connotations. As a sign of remembrance and fidelity it was a common flower both at funerals and weddings. In Shakespeare’s Hamlet, Ophelia says: “There’s rosemary, that’s for remembrance…”. Rosemary was associated with the Virgin Mary, who on The Flight To Egypt draped her cloak over a rosemary bush, turned the colour of the flower from white to blue.

Parsely: ‘the Devil’s herb’
Parsely was probably introduced to Britain but the Romans and was widely used to treat a number of complaints such as fever, kidney and gall stones, seizures and hangovers! Although a medicinal herb, in folklore it was associated with the Devil: because of the slow and unreliable sprouting of the seeds people believed that the seeds had to go to Hell seven times to ask the Devil for permission to grow.

Rose: ‘queen of the flowers’
The Rose was highly valued for its beauty and smell and was seen as a symbol of the Virgin Mary’s motherhood, Christ’s Passion and Paradise. Rose extracts were used in ointments (salves), perfume (rose water), vinegars, syrups, oils and sugars to cure many different health problems, such as heart and stomach diseases, ‘faint spirits’, swells and inflammation. In flower posies it was believed to ward off infections like the plague.

Strawberry: ‘excellent for hot inflamed eyes’
During the Middle Ages strawberries were seen as symbol of goodness, purity and modesty and were associated with the Virgin Mary and the wounds of Christ. Stonemasons sometimes carved them into alters and around pillars of churches to symbolise the perfection of God. Apart from their symbolism strawberries were thought to be beneficial for several ailments, including depression, poor digestion, thirst, sunburn and other skin problems.

Carrot: ‘for difficult childbirth’
Did you know that carrots weren’t always orange? In the medieval period, carrots were mainly red and yellow, although white and purple varieties were also available. Carrots were probably introduced in England in the 15th century and were used for a variety of complaints, among which were animal bites, urination problems and the pains of childbirth.

At Blackfriars, bees were kept in hives and would have been used for pollinating plants, making sure they would grow each year, as well as for producing honey.