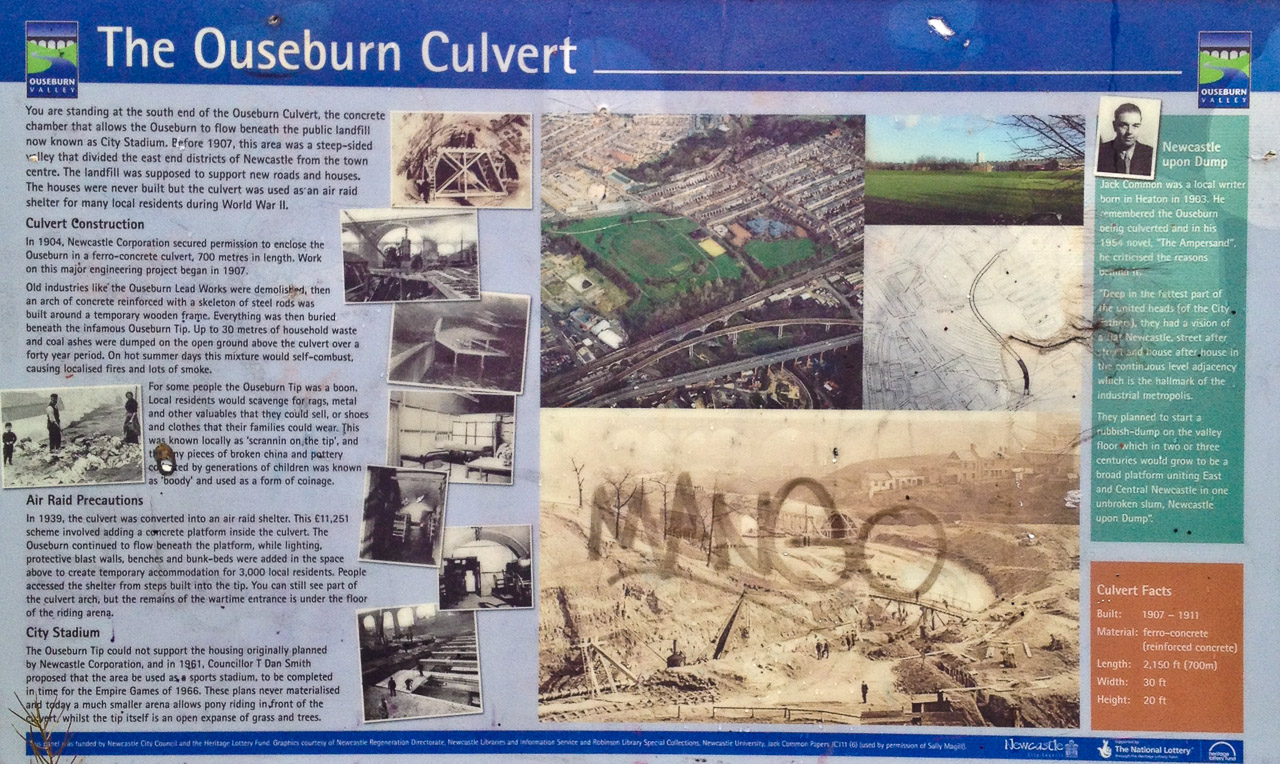 You are standing at the south end of the Ouseburn Culvert, the concrete chamber that allows the Ouseburn to flow beneath the public landfill now known as City Stadium. Before 1907, this area was a steep-sided valley that divided the east end districts of Newcastle from the town centre.

The landfill was supposed to support new roads and houses. The houses were never built but the culvert was used as an air raid shelter for many local residents during World War 11. Culvert Construction: In 1904, Newcastle Corporation secured permission to enclose the Ouseburn in a ferro-concrete culvert, 700 metres in length.

Work on this major engineering project began in 1907. Old industries like the Ouseburn Lead Works were demolished, then an arch of concrete, reinforced with a skeleton of steel rods was built around a temporary wooden frame.

Everything was then buried beneath the infamous Ouseburn Tip. Up to 30 metres of household waste and coal ashes were dumped on the open ground above the culvert over a forty year period. On hot summer days this mixture would self- combust causing localised fires and lots of smoke. For some people the Ouseburn Tip was a boon. Local residents would scavenge for rags, metal and other valuables, that they could sell, or shoes and clothes that their families could wear.

This was known locally as ‘scrannin on the tip’, and the many pieces of broken china and pottery collected by a generation of children was known as ‘boody’ and used as a form of coinage. Air Raid Precautions: In 1939, the culvert was converted into an air raid shelter. This £11,251 scheme involved adding a concrete platform inside

The Ouseburn continued to flow beneath the platform, while lighting, protective blast walls, benches and bunk beds were added in the space above to create temporary accommodation for 3000 local residents. People accessed the shelter from steps built into the tip. You can still see part of the culvert arch, but the remains of the war time entrance is under the floor of the riding area.

City Stadium: The Ouseburn Tip could not support the housing originally planned by Newcastle Corporation, and in 1961, Councillor T. Dan Smith proposed that the area be used as a sports stadium, to be completed in time for the Empire Games of 1966. These plans never materialised. Today a much smaller arena allows pony riding in front of the culvert, whilst the tip itself is an open expanse of grass and trees.